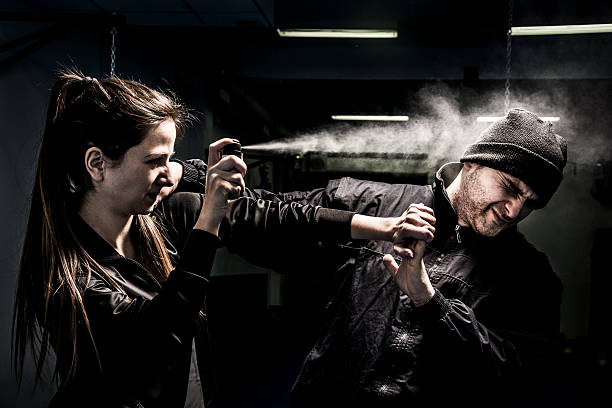 According to the FBI, in 2017 there were over 800,000 aggravated assault cases reported in the U.S., a measured increase from 2016. When looking at the vast options for personal protection while out of the house, its always interesting the amount of people who rely on a single option for defense. Whether its carrying a firearm or the age old “I’ll just use my keys” option, its important to have a backup plan. Threats can be everywhere, and you may not always be armed, or you may not be easily able to reach your pepper spray at the bottom of your purse. Today I want to go over some common options for personal protection, their pros and cons. This list was picked for their less than lethal appeal and their common availability.

The biggest option I hear people, and specifically women, use as a viable self defense tool are their keys. The theory here is that they will put their keys in between their fingers pointing out like a set of claws. The idea being you can gouge, scratch, and defend yourself with them. I don’t know where this technique came from but for the vast majority this is dangerous for 2 big reasons. The first big one is something called degloving, where your skin is peeled off your fingers. I’ve seen this happen many times with people wearing wedding rings and falling on stairs or a ladder and the ring strips the flesh off the finger. The key ring on your keys can do the same thing in a violent attack if you fall or if the keys are pulled from your grip. The second reason is the exact reason people look to their keys as a defense mechanism, and that’s that they are a hard object with teeth! This is also the problem with wielding them as a defense tool because if you punch something with the keys in your grip, you are just as likely to cut yourself as you are the assailant. You can also break bones in your hand if you miss your target and find a wall or car. So, although these have been an age-old popular tool by many people as viable for self-defense, I would caution people against it.

Another option that is commonly talked about is pepper spray, mace, etc. These are a concentrated form of capsaicin or other chemicals that when squirted in the eyes of an attacker can cause pain and temporary blindness. This can be a viable option for many people, however there are some big drawbacks as well. The upside is that the pain and blindness may give you enough time to escape the situation, subdue the individual, or even cause them to attempt to flee from you! The downside is the limited range and ability to engage a target more than once, or multiple targets. The standard keychain spray is good for about 5 bursts at roughly 6-12’ depending on your manufacturer. The spray can be in a stream (best distance but requires accuracy) or a cone (less distance but better likelihood of getting your attacker). The limited range and ability to re-engage your target can be problematic for some, but it can be a great deterrent. As someone who has willing been sprayed for demonstrations before, I’d rather never deal with it again.

The last one I want to talk about is hard objects such as batons, “tactical pens”, and kubotans (self defense keychain device). These devices can be restricted in some areas so you will need to check your state or local laws. These objects are designed to be striking tools that inflict fear and pain on your aggressor. The batons are often extendible and are used to strike at a longer distance than the pens and kubotans. With training and experience a baton can disable your attacker with limited strikes. The pens and kubotans lack the distance batons afford you, but similarly will disable or incapacitate your aggressor with limited strikes if you know what you are doing. All of these striking rigid objects can inflict immense pain when targeting key areas and can definitely deter people. The limited strike distance and the need for knowledge on where to target to defend yourself effectively can limit their effectiveness. Swinging wildly into the night will not protect you.

These tools are common options for less than lethal personal defense, they don’t represent all possible options. Other options such as taser, stun guns, monkey fists, etc. may be available in your area where many others can’t get them. Do your research and pick what is going to be the best for you. Kimber makes a 2 shot pepper blaster that sends the OC spray at 90 mph for those wanting to use a spray, Smith and Wesson makes several options for collapsible batons with varying lengths, and there are a slew of “tactical pens” in the world.  Practice with them and make sure to take training to better help defend yourself. Every 40 seconds someone is attacked in the U.S., will you be prepared?