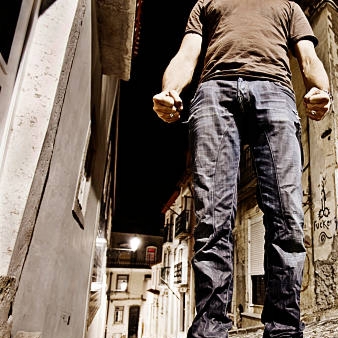 I’ve seen several stories lately in the news of random attacks on unexpecting victims.  The one I just read today, was about a deranged homeless man walking up a driveway and body-slamming a young boy onto his head.  As of the writing of this post, the boy is still in critical condition.

This kind of attack highlights how infrequently we discuss the possibility of being attacked or how to recognize the signs beforehand.  These unprovoked attacks are generally horrific and traumatic for the recipient.  I want to explain some of early signs that you can look for before a physical assault.  In this post, I’m ignoring shootings and sexual assault and focusing on the blitz attack. A blitz attack is a sudden, overwhelming attack that can be vicious, focusing mainly use of the hands or a knife.

Before I go on, I am not the end-all expert, and I don’t intend this to be a complete list of possible behaviors. These behaviors are specific to physical assaults.  Each person is different some will exhibit all of these and some may not.  The intent of me sharing these early warning signs is to educate you on identifying a possibile attack.  How you respond will be directly related to your training and awareness at the time.

One of the first things I notice is the physical position of the individual.  To me, this means two things: their position in relevance to you and their position relative to other threats or escape routes.  Often someone who is planning to attack you will get inside your comfort zone, closing the gap they must overcome to physically hurt you.  The closer someone gets to you, the less room you have to respond to an attack and the fewer options you have to retreat.  Aggressors can also try to isolate you from friends or escape routes to ensure that they have a dominant position.  They may also position themselves closer to an exit to ensure a rapid escape after a blitz attack. The physical responses of a person are the next best indicators of intent. These are often subconscious, which can help give away their intentions. Things like changes in breathing, hands concealed or searching in a bag.   I specifically focus on their eyes, shoulders, and hands.

Eyes can be tricky but very telling if you can learn to read them. Aside from the physiological response of pupil dilation before the confrontation, you will have someone who will usually stare through you.  Instead of being attentive and glancing from you to an object that you are talking about or to prevent uncomfortably long eye-contact, the person may almost be looking through you.  This distant stare is often associated with someone who isn’t paying attention because they are thinking about their next move, which may be against you.

Their shoulders will mimic their stance. Most individuals will stand with their feet and shoulders square to the person they are talking to.  However, when someone is contemplating violence, they may stand with their feet slightly staggered to maintain balance during their initial attack.  So too the shoulders will angle with one closer to you and the other slightly farther away.  This is most common with someone who is going to sucker-punch or blitz attack.

Open hands are usually a sign of peace or calmness.  If you see someone clenching their fists, this could be a sign of aggression.  Other aggressive tendencies may be shoving their hands far into their pockets, not just resting them. Their elbows will almost fully lock trying to push their hands further down.  A third thing to watch for is hands that go behind the body and the chest comes out and rocks forward.  This could be another precursor to them preparing to balance for an outgoing blow.

The blitz attack is one that is usually the most vicious, happening in the blink of an eye.  These attacks are often so quick and violent that bystanders don’t even realize the severity of the situation for several seconds or minutes.  During this moment of confusion, the aggressor will casually walk away and melt into the crowd and disappear.  These are the attacks that are the most scary and can have little time or buildup to the attack.

There are many different techniques, behaviors, and postures you can look for to identify possible aggression.  There is no overarching sign that will make everything instantly clear that someone is about to cause you or your family harm, which is why you should always be aware of your surroundings.  Talk to your children about ways to recognize when someone is acting erratic or what they should do if they are being approached by someone they don’t know.  I caution you to practice vigilance. Never let someone inside your personal bubble, know your escape routes, and train to respond instinctively to threats.  Without awareness and training, the precious half a second it takes for you to see the attack, recognize it, and respond may be too slow.