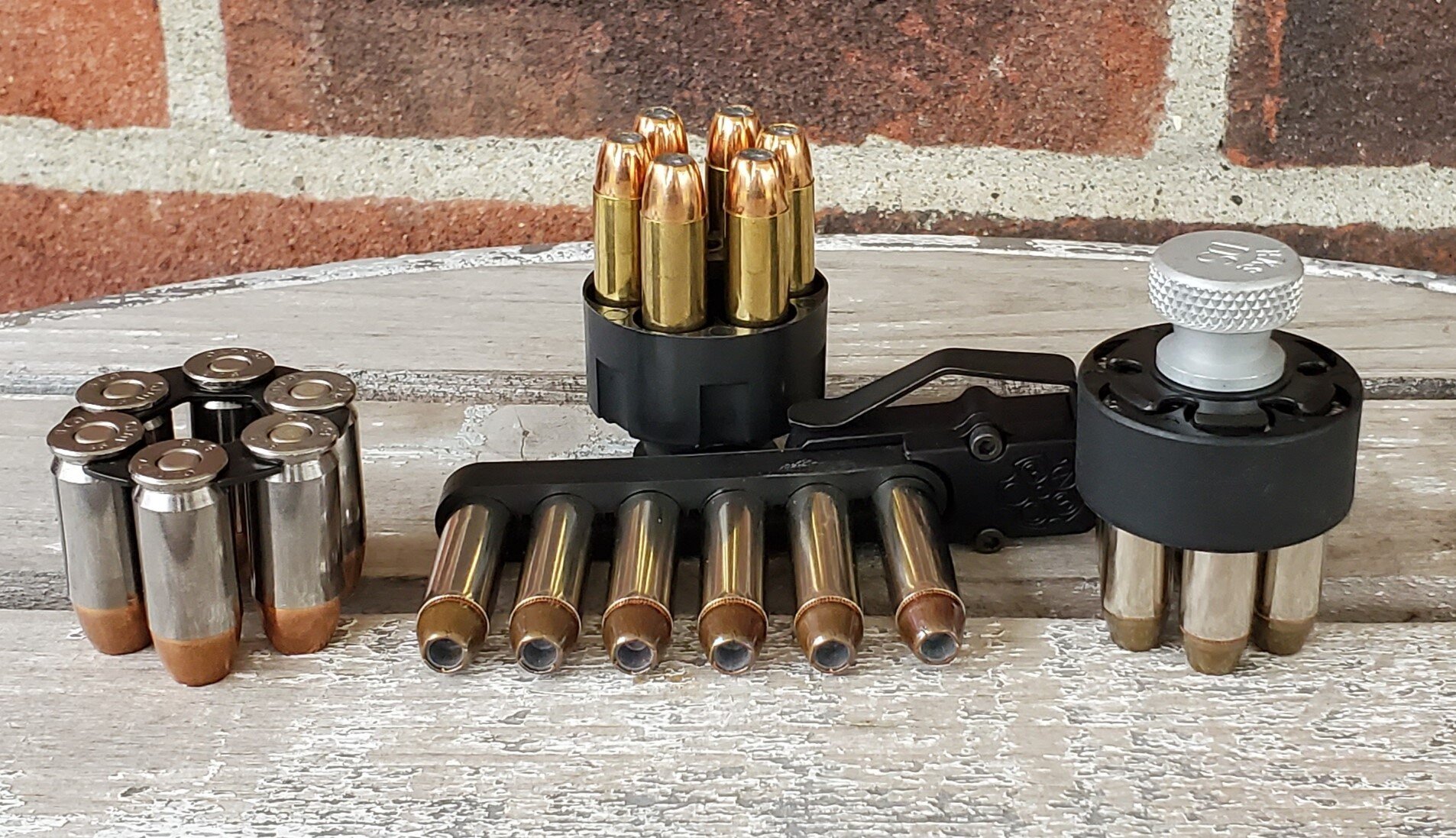 I want to take a little time to talk about revolvers. This post may not appeal to the majority as any people find revolvers to be antiquated. This can be due to the limited number of modifications and customization, smaller capacity, and difficulty many people have reloading them quickly or easily like a semi-auto. I will admit, reloading a revolver quickly is not as simple as a semi-auto and often requires special tools, equipment, training, and in some cases specifically designed pistols. Today I want to talk about a few options for faster reloads for modern revolvers which includes speed strips, speed loaders, and moon clips. You can click on any of the photos below to see an example of each reload.

Speed strips are little rubber holders that keep the bullets contained in a row. This keeps the bullets organized and spaced out so you can usually put 2 bullets into the cylinder at once.  There’s a reason for this! They are designed for the “shoot two, load two” method. This keeps you with a full cylinder at all time. The method is to engage your target twice and take cover. With the speed strip, you would open the cylinder barrel facing down at a 45-degree angle and press the ejector rod halfway up and release. The 2 cases that were fired would stay half ejected due to the expanded ends from being fired. You would remove them, take out your speed strip, press the two rounds into the open holes and peel the strip away leaving these fresh bullets in the cylinder. This method obviously takes a lot of practice to master and has a lot of merits. It was very popular by the FBI during their early years before adopting semi-autos.

The last method of moon-clips is the fastest method but does require a gun specifically cut to accept them. A moon clip is a small stamped piece of metal that has all the rounds pressed into it and held together. Your gun will need to have a cylinder cut to accept this because the piece of metal stays with the bullets and goes into your gun with them as one unit. Again, you would empty your cylinder and face the barrel straight down, gripping the cylinder with your non-dominant hand, and using your dominant hand, drop the entire moon clip/bullet combo into the gun and close the cylinder. That’s it! The clip holds the rounds together during the load and unload when you eject the spent cases. This is the fastest as you don’t need manipulate additional knobs, strips, or anything else.

Admittedly when talking about reloading, modern revolvers isn’t as easy as hit a button and slam a new magazine into the gun. You want to practice your method of reloading, so the entire process is part of your muscle memory. You don’t want to think about it, you want your body to go through the motions effortlessly and smoothly. Slow is smooth, smooth is fast. Regardless of if your EDC is a revolver or semi-auto, continued practice and training to optimize your effectiveness and time on target is key.